“Hell’s War Against Our Unborn Babies And Our Little Children. The Weapons? ‘Aborterrorism’ And ‘The Homosexual Agenda'” 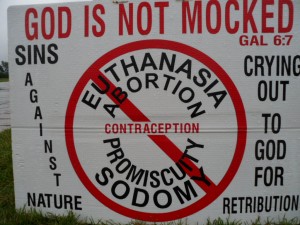 Hell is unleashing its full fury against our unborn babies and our little school children. Throughout the world, including Canada, there is a well coordinated war by leaders in the ‘Culture of Death’ such as U.S President ‘Barack Obama’ and the abortion giant, ‘Planned Parenthood’. They are attempting to impose contraception and abortion throughout every country in the world. I call it ‘aborterrorism’, the worst form of terrorism, against the innocent, defenceless unborn babies. (cf: www.aborterrorism.ca )

In a like vein, are the promoters of the ‘Homosexual Agenda’ throughout the world. Their goal? None less than to indoctrinate, seduce, recruit and sodomize our little school children. Please go to www.striveforheavennow.ca and to page ‘Sin and Sex’ and read the document:  “Homosexuality: Sinful, Therefore, Deadly Lifestyle.” and “Worldwide, ‘The Real Homosexual Agenda.’: Seduce and Recruit our Children.” by Donald Andre Bruneau. After reading this well researched document you will understand how the powers of Hell have been fully released against our little children through the ‘Homosexual Agenda’.

As part of the ‘Homosexual Agenda’ Donn Short, a law professor is passionately advocating the ‘queering’ of our Canadian schools. (Note: definition of ‘queer’ according to Merriam-Webster Dictionary: “One that is queer;especially often disparaging:homosexual.)

“In “Queering Schools, GSAs and the Law: Taking on God.”–an excerpt from the book “The Gay Agenda: Claiming Space, Identity and Justice. by Donn Short” who is a law professor at the University of Manitoba, calls for changes in “state-issued law and policy approaches.” to ensure that Canadian schools, including Catholic schools, become “queered”.” (cf: http://gloria.tv/?media=385996 )

In his article professor Short states: “The law offers the best present and future challenge confronting the work that needs to be done in queering of Canadian schools.”
His goal of ‘queering’ our schools echoes the words of ‘Daniel Villareal’ who said in “Querrty on-line magazine: “I and a lot of other people want to indoctrinate, recruit, teach, expose children to queer sexuality, AND THERE’S NOTHING WRONG WITH THAT.” (cf: “Queerty Columnist Admits Homosexual Agenda Includes Indoctrinating School Children.” by I.M. Kane in “The Milestone diaries, June 6, 2011; ( (http://imkane.wordpress.com/2011/06/06/9)

Father John O’Connor, O.P. in his book: “Hell’s War Against Our Children: with seven appendices on “How To Fight This War” by Leo A Brodeau, Ph.d.” wrote many years ago
about Hell’s war against our children which I believe is nearly at it peak. The greater portion of our sex-obsessed humanity is heading towards another even greater, worldwide ‘Sodom and Gomorha’. (cf: Jude 1:7: “As Sodom and Gomorrha and the neighbouring cities, in like manner, having given themselves to fornication and going after other flesh, were made an example, suffering the punishment of eternal fire.”

He states how today we have never lived a life so sinful (emphasis mine) that man has lost the ‘sense of sin’. He says also that: “Perhaps no other century as the century we live in has had a life so sinful. But there is something new added in the sins of this century: the man of today, more sinful than those who came before him has lost the sense of sin. He sins, but laughs and even boasts. Man of today has arrived at this stage because he has placed a division between himself and God…believing
that when God is ignored, everything is possible. The man of this century wishes to realise himself as stronger than God and against God, and  comes finally to the point of being man debased, anti-man, because man can only perfectly realise himself in God.”

A prime example of a man who has lost the sense of sin and is “taking on God” iis Profesor Donn Short. He clearly and emphatically states in the title of his article: “Queering Schools, GSAs and The Law: Taking on God.” (emphasis mine) Father O’Connor goes on to speak of
the consequences of man’s sinning and ‘taking on God’, rebelling against God. He states in his book (pg 64): “It was in anticipation of this global insurrection against God that the Blessed Virgin interceded with her Divine Son to permit the frightening reality of Hell to be shown to the world for a searing instant.” When interviewed by Fr. Lombardi, Sister Lucy (one of three children to whom Our Lady Of Fatima appeared to in 1917 in Fatima, cf:  http://www.salvemariaregina.info/Message.html ) replied to his question of “Do you really believe that many will go to Hell?”–”Father, many will be lost.”

Yes, many souls today will be lost because of the sins of the flesh, ‘abortion and homosexuality’, unless they repent and seek out God’s mercy. Our Lady of Fatima said to Sister Lucy:

“More souls go to Hell because of sins of the flesh than for any other reason.”
(cf: www.salvemariaregina.info/message.html )

Without God, man self-destructs. For the most part, man is turning his back on God, freely choosing to refuse His awesome and precious Love and Mercy. There is but a ‘remnant’ of Christians who are serious about truly living out their faith and loving God and their neighbour, striving for Heaven, now!

The greatest gift that God has given every human being during his/her life on earth is the ‘freedom of choice’; the choice to do good or to do evil, to love God and neighbour or to hate and kill and the choice to ultimately find eternal salvation through God’s only Son, Jesus Christ or reject His offer and consequently go to Hell for all eternity. (cf:For God so loved the world, as to give his only begotten Son; that whosoever believeth in him, may not perish, but may have life everlasting.(John 3:16) (cf: www.striveforheavennow.ca/ Perfect Love)

This ‘Truth’ of God’s awesome love for each and every human being is found in God’s Word and the Traditional Teachings of the Holy Catholic Church and must be made known now more and more, in this ‘Culture of Death’. We must do all we can to save people from Hell.

The Judgment Of God: A Sobering Encounter.

If anyone thinks that God turns a deaf ear and looks the other way when someone co-operates with the ‘Culture of Death’…I invite you to listen to two testimonies of ‘Life after Death’, among many. The first is a Catholic priest by name of Fr. Stephen Scheirs who was a priest who did not preach the truth (cf: http://openingthefloodgatesofmercy.blogspot.ca/2012/05/father-steven-scheiers-judgment.htm  and Dr. Gloria Polo (cf: http://testimony-polo.blogspot.ca ) who died after being terribly burned by a lightning bolt on May 5, 1995. She was judged by God but given permission to return to earth..They both found out through their ‘life after death’ experience that we each have to give an account to God for our ‘sins of commission and our sins of omission’ at our immediate ‘personal judgment’ before God after we die.

The Antidote Against The Culture of Death.

What is the greatest ‘antidote’ against this genocide of the unborn human being in the womb and the ‘Homosexual Agenda’? I say it is through much prayer and by speaking forth the ‘truth’ in love, about abortion, homosexuality and the rest of the ‘Culture of Death’.

When the Virgin Mary, ‘Our Lady of Fatima’ appeared to three little children in Fatima, Portugual, in 1917, she gave dire warnings to the world of the evil times we are presently living in. She said many crucially important things which are relevant to every human being. Some of the more important ones are:

Will you make a difference and pray the Rosary for the conversion of sinners and for Peace in the world?

“When ‘truth’ is compromised or denied, evil takes over.”

In regards to our duty to speak forth the truth, Pope Benedict XVI said: “This remains the mandate of the Church: she does not preach what the powerful want to hear. Her criterion is truth and justice (emphasis mine) even if that garners no applause and collides with human power.”(cf: http://www.lifesitenews.com/news/pope-church-must-preach-what-god-says-not-what-people-want-to-hear )

Whether it be to protect the unborn baby from aborterrorism or our little children in our schools from the “Homosexual Agenda” (cf: Homosexuality: Sinful, Therefore, Deadly Lifestyle.” And “Worldwide, ‘The Real Homosexual Agenda’; Seduce and Recruit our Children.” By Donald Andre Bruneau. (Cf: www.striveforheavennow.ca / page ‘Sin and Sex )  we must protect them. We cannot remain silent!

“To speak the Truth is ‘Charity’ in its most dangerous and splendid form. You may even die as a martyr for it.”

But to those who refuse the Truth, take heed to God’s sobering Word in Isaiah 5:20:

“Woe to you that call evil good, and good evil: that put darkness for light, and light for darkness: that put bitter for sweet, and sweet for bitter.”

If you have read the two aforementioned testimonies you will understand the gravity of Isaiah 5:20!

So I ask you, will you speak out ‘Truth’ and pray and sacrifice for lost souls as a loving and compassionate Canadian  or  will you be part of  the ‘cold and selfish society’ which is inflicting this genocidal “Culture of Death’ upon our unborn Canadians in the womb of their mother and seducing and sodomizing our little children?

“My Talk About God’s Love And Hell With An ‘Agnostic’.”
“Lent: 40 Days Of Prayer & Fasting, Silence With God, So That We May Become Holy As He Is Holy.”