“More Souls Go To HELL Because Of The Sins Of The Flesh Than For Any Other Reason.”: Our Lady Of Fatima’s Message To The World.” by Donald Andre Bruneau 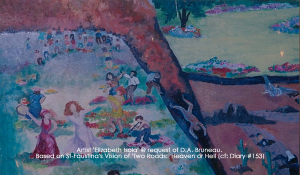 In what follows I hope to inform with Truth and Love and reach some of the multitudes who are living a sinful, pre-marital, extra-marital,  sex-obsessed lifestyle. At any moment, any day, without repentance and without Christ as their Savior they can be sent into HELL when they die.

Immediately after death a person appears before the ‘Judgment Seat Of Jesus Christ’. “For we must all be manifested before the judgement seat of Christ, that every one may receive the proper things of the body, according as he hath done, whether it be good or evil.” (2 Corinthians 5:10)

And discover what everyone needs to know about “The Four Last Things” which are “Death, Judgment, Heaven and Hell”.

If you died today in a state of mortal sin without reaching out to God for His Mercy you will spend Eternity in HELL! Are you going to foolishly gamble your ‘soul’ going to HELL just to satisfy your sexual appetite and lustful cravings for a few moments?!

Our Lady of Fatima showed HELL to the three children of Fatima. “As Our Lady spoke, she opened her lovely hands, disclosing beneath a sea of fire; and plunged in this fire were demons and the souls, as if they were redhot coals, transparent and black or bronze colored; with human forms, which floated about in the conflagration, borne by the flames which issued from it with great clouds of smoke falling on all sides as sparks fall in great conflagrations—without weight or equilibrium, among shrieks and groans of sorrow and despair which horrify and cause to shudder with fear.”

“The devils were distinguished by horrible and loathsome forms of animals frightful and unknown, but transparent like black coals that have turned red-hot. “Here you see Hell, where the souls of poor sinners go,” she said at length.” “To save them God wishes to establish in the world the devotion to my Immaculate Heart. If they do what I tell you, many souls will be saved and there will be peace.”( cf:    http://www.salvemariaregina.info/SalveMariaRegina/SMR-104.html )

Many people today don’t believe in Hell. They don’t want to believe in God or in Hell because it permits them to continue on in their sinful and sex-obsessed lifestyle. But when they ‘arrive’ in Hell, to spend ‘ETERNITY’ there, they will believe that it is real!

The pains of Hell are horrific, but the worse pain will be ‘remorse’, will be the pain of ‘loss’. In “Here you see Hell” Abbot Marmion says: “The damned soul is torn by two forces: its nature tends, with irresistible passion towards God, the last end for which it was created, and on the other side, its will, fixed in opposition, rejects God, blasphemes Him and finds its satisfaction in this aversion. Who can describe the nature of this despair? And Saint Thomas says: “The pain of the damned is infinite, because it is the loss of an ‘infinite’ good.” ( cf: http://www.salvemariaregina.info/SalveMariaRegina/SMR-104.html )

I encourage you to visit this website. The apparitions of Our Lady of Fatima are a historical fact, recorded by the secular Press and approved by the Catholic Church as being authentic. Thousands witnessed the ‘Miracle of the Sun’, on October 13, 1917, where “the sun turned blood red and began to dance in the heavens; it even began to leave the sky and throw itself into the crowd of over 70,000 people who watched in terrified wonder. All thought that the end of the world had come.”

The message of Fatima is a very sobering message with the goal of saving ‘your’ soul for eternity! This message is God’s mercy and warning to you today. In addition to extra-marital and pre-marital sex, ‘homosexuality’ is rampant throughout the world today.

We need to be more aware of this great evil and speak out against it and warn the parents of children in schools and in churches against the “Homosexual Agenda”!

I sent this document to every Catholic Bishop in Canada and to every Catholic School Board Trustee in Ontario so as to warn them and inform them of the “Homosexual Agenda” behind the passing of  “Ontario Anti-Bullying Bill 13” ( http://www.p-first.com/bill-13-archive ).

What was the outcome of my outreach to the Bishops and school trustees? SILENCE…no replies!

Just recently I discovered the reasons for this ‘Silence’. I read on ‘LifeSiteNews’…”Catholic Clerical ‘Gay Mafia’ finally being exposed in media?” by Steve Jalsevac, Feb 22, 2013.) ( http://www.lifesitenews.com/blog/catholic-clerical-gay-mafia-finally-being-exposed-in-mainstream-media )

In this article they make a reference to an excellent document by ‘Fr. Dariusz Oka, Ph.D. It reveals the ‘global phenomena’ of a “huge homosexual underground in the Church” ( http://rorate-caeli.blogspot.com/2013/02/fr-dariusz-okos-major-article-with-pope.html )

When you have read this report you understand the ‘Why?’ of  the ‘Silence’ by the Bishops and the School Trustees in Canada and Ontario. The Homosexual Bishops are covering up for the homosexual priests in their diocese  and the ‘good’ Bishops are fearful of reprisals if they speak up, they are fearful of the ‘Gay Mafia’ within the Church.

On February 15-17, 2013 I sent an ‘Open Letter’ to every Member of Parliament and to the Prime Minister, with my document on the ‘Homosexual Agenda’ attached to it. So far…NO RESPONSE!

This SILENCE must be broken! As Fr. Dariusz said: “The global network of homolobbies and homomafias must be counterbalanced by a global network of decent people.” Will ‘you’ be one of these ‘decent people’ and inform others of the ‘Homosexual Agenda’ by referring your friends and acquaintances to this article?

We need to pray and reach out to all the sex-obsessed people out there, including the homosexuals in an effort to save their souls from HELL.

I invite you to go to page “Perfect Love” at www.striveforheavennow.ca and learn about God’s awesome love and mercy and how He uses all means possible to knock at the door of our heart before we die. He beckons us to come to His Son, Jesus Christ.

However, God gives us ‘free choice’ to accept salvation through repentance and turning to His Son or refusing His mercy and ending up in HELL for eternity! It is your choice, will it be Heaven or HELL?