“Open Letter To Pope Francis: The Pill Kills! Please, Nip It In The Bud!” 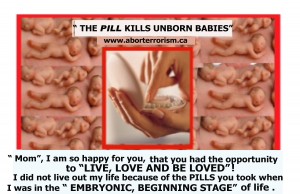 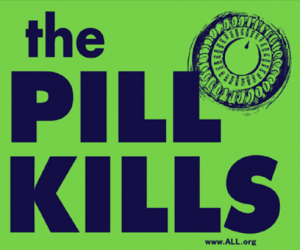 I appeal to you, Your Holiness, as the ‘Chair of Peter’, leader of the Catholic Church, to come rescue humanity from the claws of the ‘Culture of Death’.

The flow of innocent blood of the unborn babies killed by the PILL and it’s emergency back-up, ‘abortion’ has reached tsunamic proportions worldwide.

There is an expression I heard as a very wise way of solving serious problems: “Nip it in the bud!” Yes, the evil of the whole ‘Culture of Death’ must be exorcized, ‘nipped’ in the bud, at its source. That source is ‘contraception’, better known as ‘the PILL…..that KILLS.

The PILL gives the user a ‘killer’ mentality. The PILL is destroying mankind and the traditional family unit and the beautiful, genuine, love relationship between husband and wife.

The Church leadership holds an enormous responsibility before God for this Culture of Death which is so evident today in our sex-obsessed world. We see it demonstrated so clearly in the minset of the pro-choicers.

When Pope Paul VI gave the Catholic Church the prophetic Encyclical, ‘Humanae Vitae’, a significant number of Bishops and priests came against it. (Cf: http://www.aborterrorism.ca/will-the-pill-be-your-one-way-ticket-to-hell-for-all-etrernity/

The Bishops disobeyed the Pope! God have mercy on those rebellious religious leaders and the Bishops and priests of today who remain ‘silent’ and want to be ‘politically correct’ in the face of the evils of contraception. (cf: http://www.aborterrorism.ca/the-disobedience-disconnect-between-the-bishops-and-the-holy-see-allows-for-the-ravages-of-the-culture-of-death/

I am convinced that if many of the Bishops throughout the world would read Humanae Vitae and insist that their priests learn it and preach it at Sunday masses we would see a huge ‘renewal’ of LIFE over the face of the earth.

As Pope Benedict XVI prophesied in ‘Faith And The Future’: (Cf: http://www.catholiceducation.org/articles/Interiorlife/iloo13.htm

“The Church will become small and will have to start afresh more or less from the beginning. She will no longer be able to inhabit many of the edifices she built in prosperity. As the number of her adherents diminishes…she will lose many of her social privileges…As a small society, (the Church) will make much bigger demands on the initiative of her individual members.”

Most important to remember is this: “Those religious leaders who preach the Truth about the ‘Culture of Life’ and ‘Humanae Vitae’ will lose parishioners and churches but will save many souls, including their very own, from Hell. One priest who died and came back to life, but while dead, experienced being before the Judgment Seat, has a powerful testimony in this regard. His name is ‘Father Steven Schier and you may watch his testimony here: http://www.youtube.com/watch?  v=9VFE8ToVatIhttp://www.youtube.com/watch?v=_EFKnoH6bqs

Secondly, the Church would experience a ‘re-birth’, a precious renewal, as in the days of the Early Church!

Thirdly, the true meaning of mutual respect and love between a husband and wife would return to the Traditional Family unit. A beautiful Culture of Life would begin to blossom and eventually bring forth an end to the flow of blood of innocent babies created in God’s Image.

So would you, Pope Francis, have the courage to command the Bishops of the Church to bring the life-giving wisdom and words of Humanae Vitae accompanied by the ‘Theology of The Body’ of Pope John Paul II, to the eyes and ears of every Catholic Bishop, priest and parishioner.

You have the God-given authority as ‘The Chair of Peter’ to demand this under ‘Obedience’. Many Bishops will disobey but a faithful minority will obey, enough faithful followers to bring a ‘New Springtime’ to the Church and moral restoration to the very foundation of humanity–the wonderful, precious and life-giving ‘Traditional family unit’ which will once again experience marriage in a genuine ‘love-relationship’ as described by Pope John Paul II in Theology of the Body.

Husband and wife will then truly love and respect one another and that inseparable connection between the ‘unitive’ and ‘procreative’ aspect of a married couple, so crucial to a life-giving marriage, will be restored. The result of this will be the  ‘birthing of’   instead of the  ‘killing of’  those precious little unborn babies.

We, Catholic pro-lifers throughout the world, who cherish every human life, from the moment of its conception, till it’s natural death, are here to support you, Your Holiness.

On the Feast Day of the Chair of Peter,

“Will The ‘PILL’ Be ‘Your’ One-Way Ticket To Hell For All Eternity?!”
“On Ash Wednesday I Offered God’s Love and Mercy To A ‘prodigal son’ During My Abortion Protests.”