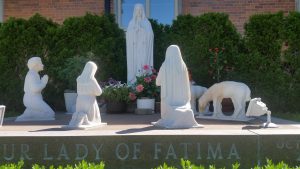 Shrine of Our Lady of Fatima,

Here is Lucy’s description of Hell:

“A sea of fire; and plunged in this fire the demons and the souls, as if they were red-hot coals, transparent and black or bronze-colored, with human forms, which floated about in the conflagration, borne by the flames which issued from it with clouds of smoke, falling on all sides as sparks fall in great conflagrations-without weight or equilibrium, among shrieks and groans of sorrow and despair which horrify and cause to shudder with fear.

The devil’s were distinguished by horrible and loathsome forms of animals frightful and unknown, but transparent like black coals that have turned red-hot.” 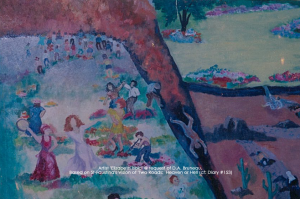 This painting represents the ‘broad road’ that leads to Hell and the ‘narrow road’ to Heaven. Between the two is the chasm of Hell.

People falling into Hell. If you follow Jesus you won’t be one of them.

“The children were so frightened that they would have died, they felt, if they had not been told they were all going to Heaven. As the three children looked up at Mary she said to them: “You see Hell, where the souls of poor sinners go.”  “To save them God wishes to establish in the world the devotion to my Immaculate Heart. If they do what I will tell you, many souls will be saved, and there will be peace.

“The war is going to end. But if they do not stop offending God, another and worse one will begin in the reign of Pius X1. When you shall see a night illuminated by an unknown light, know that it is the great sign that God gives you that He is going to punish the world for its crimes by means of…war, of hunger, and of persecution of the Church and of the Holy Father.

“To prevent this I come to….ask the Consecration of Russia to my Immaculate Heart and the Communion of reparation on the first Saturdays. If they listen to my requests, RUSSIA will be converted and there will be PEACE.  If not she will scatter her errors through the world, provoking wars and persecutions of the Church. The good will be martyrized, the Holy Father will have much to suffer, various nations will be annihilated.

“In the end my Immaculate Heart will triumph. The Holy Father will consecrate Russia to me, and it will be converted and a certain period of peace will be granted to the world.” (cf: http://www.fatima.org/ )

To prevent the chastisements of God Mary has asked Lucy for the Consecration of Russia and the Communion of reparation of the first Saturdays.

The devotion to the First Five Saturdays is explained here: http://www.fatima.org/essentials/message/lucy3.asp

To this day the Consecration of ‘Russia’ specifically, to the Immaculate Heart of Mary, has not been done.

The ‘World’ has been consecrated but not ‘Russia’ as Mary has asked. Thus there has been no conversion of Russia and wars have increased and human blood is being shed throughout the world as never before. Also man is sinning and rejecting God as never before. So many have lost the ‘sense of sin’. So there is a drastic need for Pope Francis to do the Consecration of ‘Russia’ as Mary asked. For those who differ with me I say: Russia has   ‘not converted’   and there is   ‘no peace’   in the world. Both of these are so obvious to see. And anyone wishes to read an excellent expose that shows that the Consecration has NOT been done I invite them to read “The Devil’s Final Battle.” By Fr. Paul Kramer.

Also you may visit the website http://www.fatima.org/ which has everything on it to support the belief that the consecration of ‘Russia’ has not been done.

Now I return to the topic of ‘Hell’. 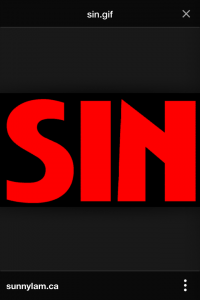 which is Hell. Today still, as in her apparitions at Fatima Mary is appearing in Medjugorje, Bosnia, since 1981. Her basic message is repentance of sin and a turning to her Son, Jesus Christ. To learn of Medjugorje go to this link: http://www.medjugorje.ws/

I was in Medjugorje in 1989 for three life-transforming days! My testimony is included in this link: http://striveforheavennow.ca/my-radical-love-for-jesus-and-mary-and-the-gift-of-life/

As well as Lucy and Francisco, Jacinta was deeply affected by seeing Hell, and offered up many prayers and sacrifices to save souls from going to Hell. She said shortly before her death:

“If men only knew what   eternity   is, how they would make all possible efforts to    amend    their lives….mortification and sacrifice give great pleasure to our Divine Lord.”

The Catholic Church is supposed to be the Shepherd guiding and protecting its sheep from dangers to their soul. Most shepherds in the Catholic Church have failed miserably in warning Catholics about the ‘Four Last Things’..Death, Judgment, Hell, Heaven. See the following link for excellent exposition on ‘Four Last Things’. http://www.catholictradition.org/Classics/4last- things.htm  In the pews we almost never hear a word about Hell. The fact that it is not mentioned does not take away it’s sobering reality after death. By then it is too late.

I would like to share with the viewer, the reader about people who were  ‘face to face’  with Hell. 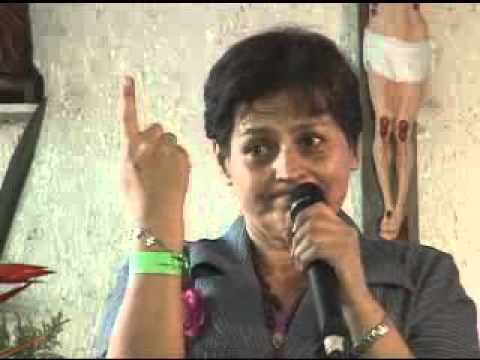 Dr.Gloria Polo… has a sobering and amazing story to tell. She has been at ‘the gates of Heaven and Hell’. She has a website and travels the world giving her testimony of her death and return to life. Her book is titled “Struck by Lightning: Death, Judgment and Conversion.” Her website is http://www.gloria.polo.ortiz.in/

Another one is… Fr. Steven Scheier…. who was found to be unfaithful in preaching the Truth of the Gospel. He was saved from going to Hell because of Our Lady’s intervention on his behalf. You can listen to his amazing testimony on video here:

Fr. Joseph Manyangat….. a priest who was in a horrible motorcycle accident, died and came back to life. He saw Heaven, Hell and Purgatory.

Afterwards he experienced a complete physical healing. Today he has a great healing Ministry. His testimony is here. 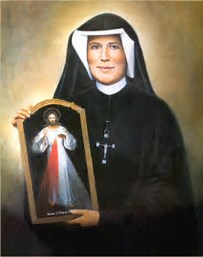 Saint Faustina of the Most Blessed Sacrament was taken….. to see Hell. She describes the different torments of Hell here……http://www.divinemercysunday.com/vision.htm

The Word of God mentions the reality of Hell. Examples….

The Cathechism of the Catholic Church teaches about Hell.

We cannot deny the  existence and reality of Hell. Is each one of us   ‘striving for Heaven’   by living out the Sacraments of the Catholic Church? Are we striving for ‘Holiness’ while we still have life on this earth?  Remember, our God is  ‘Holy’.

In Isaiah 6:3 the Seraphims say this of God:

“And they cried to one another, and said: Holy, Holy, Holy, the Lord God of Hosts, all the earth is full of his glory.”

We are called by God to be Holy. God’s Word says: “As He chose us in Him before the foundation of the world, that we should be holy and unspotted in his sight in charity.” (Ephesians 1:4)

The Catholic Church is there to show us the ‘Way’, how to become Holy.

“From the Church he receives the grace of the Sacraments that sustains him on the ‘way’. From the Church he learns the example of holiness and recognizes its model and source in the all-holy Virgin Mary; he discerns it in the authentic witness of those who live it; he discovers it in the spiritual Tradition and long history of the Saints who have gone before him and whom the liturgy celebrates in the rhythms of the sanctoral cycle.” (Cathechism of Catholic Church #2030)

My mother said to me once:

It gives us time to love,

Time to have God’s preciousness.”

Each one of us must thank God that we are not dead yet and live each day as though it was our last while we strive to live a ‘Holy’ life. Time is precious!

If you ‘consecrate’ yourself to Mary she will help you in your journey towards Heaven..she will keep you on the ‘straight and narrow road’. You may learn about the Consecration here: http://www.myconsecration.org/ .

Are you one of those sinners who has lost hope? Jesus is waiting with ‘open arms’ for every  ‘repentant’ sinner.  Read ‘Divine Mercy in My Soul.’ https://www.faustyna.pl/zmbm/en/ which is the Diary written about God’s Mercy by Sister Faustina. Therein you will learn about God’s awesome Mercy for every sinner who sincerely repents of his sins. Turn to Jesus while you still have breath.  We are warned in Matthew 13: 47-50:

“Again the kingdom of heaven is like to a net cast into the sea, and gathering together of all kind of fishes. [48] Which, when it was filled, they drew out, and sitting by the shore, they chose out the good into vessels, but the bad they cast forth. [49] So shall it be at the end of the world. The angels shall go out, and shall separate the wicked from among the just. [50] And shall cast them into the furnace of fire: there shall be weeping and gnashing of teeth.

Today dear reader is  ‘your’ day of decision, for or against Jesus, for Heaven or Hell? Such is the Message of Fatima: stop offending God, stop sinning,   repent and turn to Jesus.

We must also earnestly sacrifice and pray the Rosary for Pope Francis to have the courage to consecrate Russia to the Immaculate Heart of Mary. Then Russia will convert and influence the rest of the world to turn to Jesus and avoid going to Hell; and we will have Peace in the world.

God bless you, God love you,