“United With ‘Our Lady Of Guadalupe’ To Put An End To Abortion, Euthanasia, etc., The ‘Culture of Death’.” 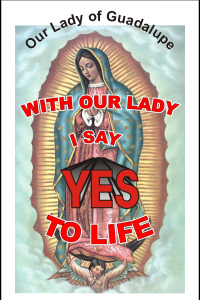 On October 4, 2014, I attended a very special Symposium, “Uniting To Stop Euthanasia.” held in Gatineau-Hull. Each speaker shed a different light on the horror of euthanasia

He said: “Everybody feels fine about euthanasia in the Netherlands.. They even have ‘mobile clinics’. Eighty percent of euthanasia cases take place at ‘home'”

It is a true-blue culture of death in the Netherlands, a nation which has for the most part rejected God. The Netherlands and Quebec are images of what a rapidly increasing number of Catholics in the world are becoming….pagan. The following site gives startling statistics to show this.

One of the key words I picked up from his talk is the right to self-extermination When I heard this phrase immediately a sign that I see every day, exhibited by my pro-life friend Fri Tony Van Hee, S.J, came to my mind. His sign reads:

“WITHOUT GOD WE SELF-DESTRUCT”

This sign is so ‘a propos’ to describe the state of the world today.

More and more God is being ‘dethroned’ and ‘me, myself and I’ are focused on the gods of this world, such as $$$, material possessions and sexual pleasures, etc.

Ever since the advent of the ‘birth-control PILL’, pro-choice women have begun the largest genocide of humans ever known–the world calls it abortion. I call it what it truly is, ‘aborterrorism’ (CF: www.aborterrorism.ca ) which is the worst form of terrorism upon the most innocent and defenceless unborn babies.

It is BIG people killing little people. With the PILL women are also causing self-destruction of their own life, physically, mentally, emotionally and spiritually.They will end up with breast cancer (CF:

Many women who abort later commit suicide, become depressed, become dependent on drugs and alcohol, etc. until they find peace with God through His Son, our Lord and Savior, Jesus Christ.

You see, eventually they come face to face with the reality and truth that they have killed a human being in their womb. Speak to women who have had an abortion and regret it (CF: www.silentnomore.com ) and you will see that what I say is 100% true. 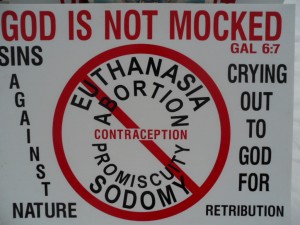 With abortion running wild for over half a century we have no more respect for LIFE at any stage. We are now seeing the arrival of another ‘tsunami of death’, death of the elderly and the disabled—euthanasia!

It has begun in Canada, in the province of Quebec. Quebec passed Euthanasia Bill 52 on June 5, 2014 with 94 votes in favor and 22 against. Eighty percent of people in Quebec support medical aid in dying. Bill 52 is scheduled to be implemented in December of 2015. The absurdity of it all is that they call it ‘Health Care’ and not ‘Euthanasia’.

Personally, I was not surprised to see Bill 52 pass with a majority vote. Quebec has become, like the Netherlands, a ‘Pagan people’ for the most part. They showed this very clearly when Pope Paul VI’s Encyclical ‘Humanae Vitae’ came out in 1968. They rejected it outright. Also most Canadian Bishops rejected the essence of ‘Humanae Vitae’ with their ‘Winnipeg |Statement’.

When you reject the Church’s teaching on ‘Human Life’ you adopt a ‘killer mentality’. Remember what I said earlier:

WITHOUT GOD, WE SELF-DESTRUCT.

Myself, other pro-life people and pro-life people with disabilities left this conference with an even greater determination to fight for the protection of human life created in the image and likeness of God, from the moment of conception till it’s natural death.

However I proclaim a great caution! One of the speakers, a disability rights activist, echoed the opinion of many in the pro-life movement when she said: “

“You have to fight for your rights.” She then also said: “Oppression and discrimination is a better message (in the fight for pro-life rights) than the morale approach.”

Many pro-life people are of the opinion that the Christian message should not be part and parcel of abortion and euthanasia protests.

The pro-life battle is a spiritual battle against principalities and powers in high places and our best weapons in winning this ferocious battle is the power of prayer and the Word of God and the teachings of the Magisterium when engaging with those who are pro-choice and pro-Culture of Death.

“If therefore the Son shall make you free, you shall be free indeed.” (John 8:36)

As a pro-life advocate I am focused on saving human lives AND souls!

Jesus said “I am the way, and the truth, and the life. No man cometh to the Father, but by me.” (John 14:6) John 14:6 explains so clearly why the fight against the Culture of Death can only be successful with Jesus Christ through the power of the Holy Spirit.

There is not just this life on earth that is at stake here, but the next life, the real and eternal life! Remember , we each have a soul that lives on after this life!

And there is a Hell, and a Purgatory and a Heaven. Which one are you focused on? If you don’t believe in them I suggest you listen to Dr Gloria Polo’s testimony: http://english.gloriapolo.net/ and/ or read the following link http://striveforheavennow.ca/perfect-love/ and you will quickly understand what I am saying.

Is there ‘hope’ on the horizon in seeing a full blown Culture of Life upon this earth once again? I say YES!

To explain to you why I know that the Culture of Death can and will one day be vanquished I want to share with you about “The Apparitions of Our Lady of Guadalupe” in Mexico.

As a result (of the message and miracles of Our Lady of Guadalupe) the few missionaries in the country were soon increasingly engaged in preaching, instructing and baptizing. The trickle of conversions soon became a river, and that river a flood which is perhaps unprecedented in the history of Christianity. 5,000,000 Catholics were lost to the Church due to the Protestant revolt in Europe at this time but their numbers were more than replaced in a few years by over 9,000,000 Aztec converts (out of 10 million).” (CF: http://www.olrl.org/prophecy/ladyofg.shtml )

Here is the effect that the apparitions of Our Lady of Guadalupe had on the Aztec Indians of Mexico:

“But scarcely had the Most Holy Virgin of Guadalupe appeared and taken possession of this her inheritance, when the Catholic faith spread with the rapidity of light from the rising sun, through the wide extent and beyond the bounds of the ancient empire of Mexico. Innumerable multitudes from every tribe, every district, every race, in this immense country….who were grossly superstitious, who were ruled by the instincts of cruelty, oppressed by every form of violence, and utterly degraded, returned upon themselves at the credible announcement of the admirably portentous apparition of Our Lady of Guadalupe, recognized their natural dignity, forgot their misfortunes, put off their instinctive ferocity and unable to resist such sweet and tender invitations, came in crowds to cast their grateful hearts at the feet of so loving a Mother, and to mingle their tears of emotion with the regeneration of the waters of Baptism.” (Cf: http://www.olrl.org/prophecy/ladyofg.shtml )

As we can see from the example of the conversions of Aztec Indians by the millions due to the apparitions of our Lady of Guadalupe, she is the answer to ending the Culture of Death in Canada and in the rest of the world today.

Our Lady of Guadalupe is again making Her voice heard today through a Canadian. Mr Veilleux is Our Lady of Guadalupe’s chosen instrument to bring her pro-life message to Canada. Her message needs to be heard and heeded by everyone. He has done his part, it is now our turn to heed our Lady’s message.

Our Lady of Guadalupe’s message is found in a book she had Mr Veilleux write entitled:

“How I Was Led to Establish The Movement In Favour Of Life”. For a resume of the book click here:

The answer to stop euthanasia and abortion and the rest of the Culture of Death is well expressed by our Lord Jesus in this book:

“Do not let yourselves be discouraged by the current obstacles and resistance, dear children. When the time has come , I will overcome them in union with my Mother. As I have promised you, abortion will be overcome in your beautiful and dear Canada. My Mother and I will overpower it, we will abolish it, but we need all of your efforts, all of your prayers, your tenacity and total and absolute confidence.” (CF: “How I was Led To Found The Movement In Favour Of Life” by Renald Veilleux, pg 71)

The key is as we see is ‘prayer’ on bended knee.

“And my people, upon whom my name is called, being converted shall make supplication to Me, and seek My face, and do penance for their most wicked ways: then I will hear from Heaven, and I will forgive their sins and will heal their land.” (2 Chronicles 7:14 )

Will ‘you’ respond to Our Lady of Guadalupe’s call and give all your efforts, all of your prayers, your tenacity and total and absolute confidence in order to restore a Culture of Life in Canada?

“How I Was Led To Found The ‘Movement In Favor Of Life’.”
“My Radical Love For ‘Jesus and Mary’ and The Gift Of Life.”